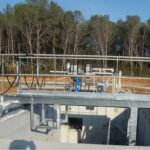 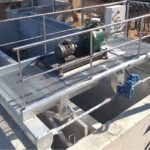 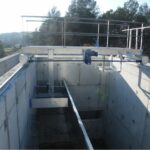 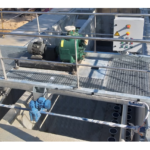 The DET16A LONGITUDINAL DEGRITTING BRIDGE is a unit mounted on rectangular civil works enclosures and comprises a walkway with a reciprocating free motion whose route runs around the side-walls, guided along tracks. Beneath the walkway, brackets and scrapers are attached. These are there to sweep the bottom and surface of the tank.

Built from folded steel plate, it has a stainless steel handrail on either side and galvanised metal grilles to walk on. The drive units which power the movement are at either end of the walkway on the longitudinal degritting bridge and flush to it.

It comprises a geared motor with a hollow output shaft which works on the main shaft, at the ends of which the drive wheels are mounted. These wheels, just like driven ones, are made of metal so as to move along rails.

Effected using rails anchored to the upper structure of both sides of the side-walls, moving lengthwise.

This consists of a set of scrapers which, through their movement, sweep the fats away towards one of the sides of the enclosure where they are discharged into a hopper. The arrangement of the two scrapers means there are no blind spots. The whole unit is suspended from the walkway of the longitudinal degritting bridge. It is operated mechanically. Depending on scraper size, electric traction may also be an option.

Consists of a pump unit and extraction pipes (can be supplied). It comprises a vertical pump unit installed on the walkway of the longitudinal degritting bridge.

(Can be supplied) To be installed within the enclosure and on the outside of one side of the same. Provides an electric supply to the control cabinet. Based on a retractable cable attached to trolleys moving along a metallic guide wire. The ground must be at least 80 cm from the top of the wall.

The manoeuvre is performed by inductive limit switches. All the electric manoeuvres performed by the unit are controlled by an electric control panel (can be supplied). It includes a torque limiter to detect overloads. The sand extraction pump works simultaneously in the same direction as the movement of the longitudinal degritting bridge.